What We All Should Understand About Mental Health 🎈

These days, we have far more information available about the world around us than at any other time in human history. We read countless media reports, see news from the corners of the world almost instantaneously, watch documentaries, and read scores of books to educate ourselves. So, our vision of the world (and our place in it) is probably 100% accurate, right?

Not so fast, as behavioral psychologists say that the average human being holds a world view that may overlap or parallel reality but is far from the truth.

Instead, we all have past experiences, memories, filters, emotions, and more – together referred to as cognitive biases – that distort our accurate portrayal of life. But by understanding these psychological and behavioral mechanisms, we can make better allowances for them, aligning our worldview more precisely while also eliminating the things that have always been holding us back.

This isn’t about being “right” – it’s about operating from a place of clarity so you can feel happier, less stressed, less anxious, more motivated, and generally on track for the life you really want to live.

So, here are 7 such cognitive biases that are probably keeping you from accurately seeing the world:

Human beings are far more strongly influenced by bad news than by good news. It’s a trait that’s instinctual, as part of our evolutionary response to identify threats. “Our brains have become Velcro for negative experiences and Teflon for positive ones,” according to neuropsychologist Rich Hanson.

Researchers have found that when presented with positive, neutral, and negative images, our brains light up far more in response to negative stimuli. In another study, it was discovered that people are more upset with LOSING $50 than they feel positive about WINNING $50.

2. Availability Heuristic (and you probably won’t remember that name!)

The easier it is to recall something from our memory, the more importance our brain assigns to that information. Basically, the more memorable it is, the more likely it is to impact our perceptions of the real world, even if that’s not always an accurate assessment.

For instance, studies show that when surveyed, people think that tornadoes kill far more people than asthma every year. In reality, asthma kills 20x as many people as tornadoes every year, but the respiratory ailment is far less memorable. Likewise, 8 out of 10 people surveyed said that accidents cause more deaths than strokes annually, but strokes actually take 200% more lives.

A similar cognitive concept, Affect Heuristic documents how we tend to form our worldview based on feelings, not facts. That’s because all external stimuli are filtered through our emotional “animal brain” before reaching our more evolved “human brain.”

We see evidence of this by our “love or hate” nature of how we adopt an opinion. Once our emotional perception validates something, we’re unlikely to change our minds no matter how many facts we’re presented with.

The moment we subscribe to a certain belief or ideal, we commit to it wholeheartedly, leaving little room for dissenting opinions. From that point, we actually start filtering out external facts and information that are not consistent with our internalized belief, no matter how credible they may be.

Research shows that when hooked up to MRI scanners, our brains go haywire when we’re presented with information that’s contradictory to our chosen belief system. This can be attributed to our animal brain once again, which revolts at anything that threatens our sense of security in the world.

No wonder why people get so crazy with fighting about politics instead of being open to civilized debate!

Our actions and viewpoints are based on conscious choice, right? Not so fast, as the cognitive phenomenon of anchoring has been shown to have a strong influence om behavior.

Take the case of a study conducted by researchers Kahneman and Tversky, who told subjects to spin a wheel with numbers going from 1-100, then to write down the result. However, the study participants didn’t know that they’d rigged the wheel to stop only on the numbers 10 or 65 every time.

Next, they asked these participants to estimate two totally unrelated percentages for a separate question.

But what they found is that subjects who’d landed on #10 when spinning the wheel had an average percentage estimate of 25%, while subjects who had landed on #65 estimated 45% on average.

Anchoring is real and is being used on you every time you walk into the supermarket, as an example. Long ago, marketers found that when they put a sign up that said “Limit 12 per customer” over soup cans, the average purchase went from 1-2 cans to 4-10 cans!

Of course, our brains formulate a vision of the world based on the totality of references and experiences we’ve experienced. So, all of the external stimuli we’ve seen, heard, read, and internalized over time become the puzzle pieces by which we assemble our reality.

That reality dictates all of our opinions and beliefs, further perpetuating a cycle that isn’t necessarily based on the total facts available.

For a good example of Referential Thinking, remember that before Roger Bannister, it was largely considered physically impossible to run a sub 4:00 mile, and no one had ever done it. But after Bannister accomplished the feat in 1954, running a 3:59, another runner did it only 46 days later! A little more than a year later, three runners did it in the very same race, and since then, thousands of runners have broken the elusive 4:00 mile barrier, thanks in part to Referential Thinking!

We make decisions big and small that impact our future based on our present state and viewpoint. While that may sound natural, being entirely immersed in the present moment when we make choices for the future discounts the big picture of where we want to go/who we want to be/what we want our life to look like, etc.

Basically, we project our current state on the rest of our life, even though we should know logically that financial circumstances, feeling depressed or stuck, or “bad luck” is just a temporary condition. But we can’t get past that and make choices as if those conditions will be permanent.

Instead, it’s crucial to gain some perspective and rise above our current thoughts and emotions to make better decisions that foster the growth and advancement we really wish for! 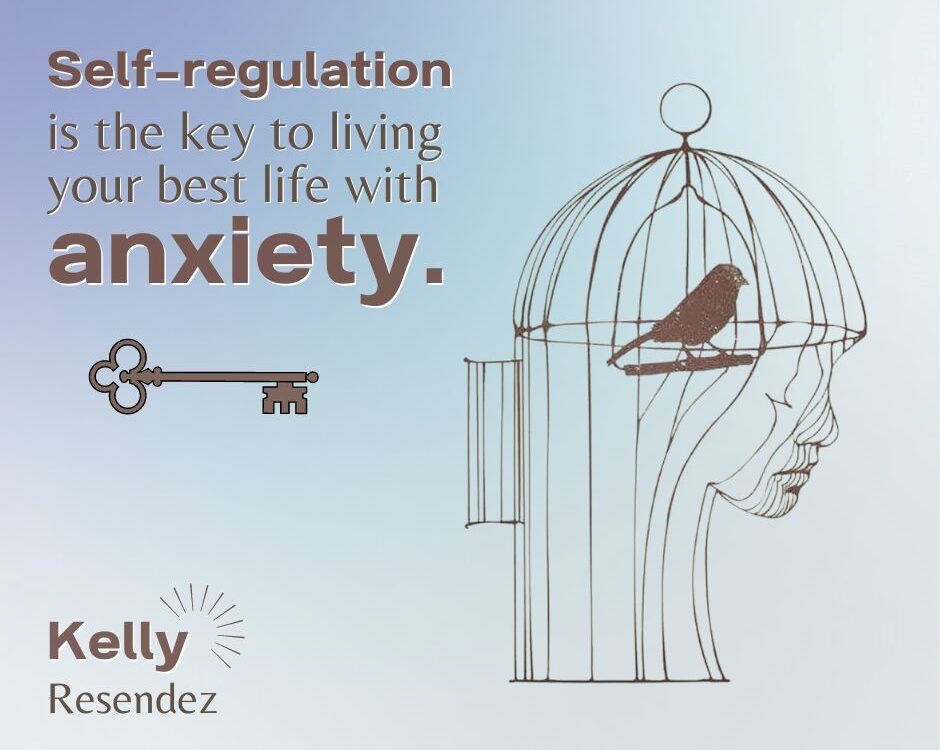 Self-regulation is the key to living your best life with anxiety.